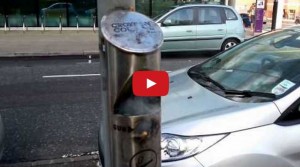 This is a follow up to the last VFX reference video, here I took a wider angle as the wind became stronger the smoke became more turbulent.  I took a side angle on this and followed the smoke upwards too.  At 1:10 some guy walks past and tells me ‘instead of filmin’ it why don-cha […]

As part of my collecting VFX reference I (risked my life – the things I do for you guys 🙂  filmed a mini charred out fire .  What had happened was someone had stuffed something into the used cigarette holder that was burning below.   I thought it was interesting to film the VFX reference […]