Hey everyone welcome how to write a comic book, the series for anyone interested in how to write comics. In part 1, we spoke about how you need to know your ‘why’ before you even begin.  In part 2 we talked about the plan, in this part we’re going to go through the script itself and understand story flow, specifically focusing on panel flow.

So the script needs to be in a specific format that is unique to comic books and graphic novels.  Before we get into the semantics of comic book scripts, let’s have a look at how you would structure a comic book script.

How many panels per page?

So you may want to load in everything into the page, well as you can imagine the more panels you have in a page the smaller the panel size will be.  Basic maths

In Digitopia: The Graphic Novel, you can see how we used different techniques in page layout, here where we introduce Natiahs for the first time you can see we’ve put in fewer panels leaving enough space – around half the page for him. We’ve also used the other panels on the page as a framing device and designed the flow of the characters and action within the page to lead to the revelation point.

In this page where Jay and Silas escape the oncoming Confederate army, we had a lot of action and exposition to get across – when writing a comic book, keep in mind that there is a per page cost to everything you do. Yes you can spread it out over several pages, but there is a cost implication both in terms of paying artists but also any printing costs you will have. However despite these costs, the main driver of how to arrange the panels should be the story. I like to keep certain story elements together to keep the reader engaged in the story – use the reader experience at the heart of the story to drive these layouts

The number of panels you have on your page shouldn’t be what determines the structure of your page, you should focus on the flow of your story. Sometimes you will need ten panels per page, sometimes

Only one piece of action per panel

As obvious as this may seem (and many people make this mistake so keep with me here) you should only show one piece of action in one panel.

The reason that I bear this out, is that coming from a screenwriting background, I had to change my way of writing from writing a sequence of actions for a shot to a single action for a panel. 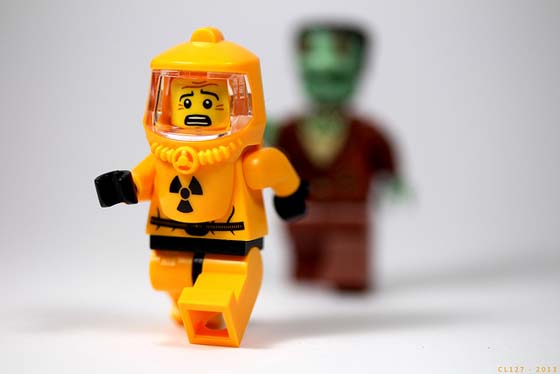 Don’t overdo the dialogue in any given panel

The other thing to bear in mind is the amount of dialogue on any one panel.  There’s a few different opinions on the number of words in any given panel, it differs from somewhere between twenty five and forty depending upon who you speak to.

My own point of view, especially coming from a screenwriting background is that you want to imagery to tell the story as much as you can.  If you’re relying on lots of dialogue, speech and captions then you will probably want to revisit the layout of the panels that are on your page as the story isn’t flowing.

one practical reason is that there just won’t be enough space for too much dialogue, you have to leave room and the more dialogue you have the less room for showing the story (image by Robert McGoldrick, https://www.flickr.com/photos/bobsfever/8330253954/)

From what I have studied though, dialogue and captions hold the reader on a panel for longer, making the reader more absorbed into the story and less likely to flick through and not pay attention.

The idea I think is to not have the specifically the reader look and linger over the art in every panel, but moreover to follow the story flow – that is what really hooks them in.

Working on the flow is what makes the comic really work.

So how do you achieve that flow, well it comes back to the basic rules of storytelling – have you got a central theme that dictates the pace, the characterisation, even the action scenes within your story?

How do you make your comic book flow?

Well try to tell your story in only a few lines, can you do it?  Most likely if  you can then it’d go something like this

It’s about [Character Name], who needs to [Character Problem] in order to [What your character needs to do to fix his/her world].

What the [Character Name] does is tell us who your story is about – who is that central character that the reader is going to identify with.

[Character Problem] tells us what the action of the story is going to be, is it an action-adventure story, a horror story and medieval fantasy.

[What your character needs to do to fix his/her world] tells us what the theme of the story is, i.e. something was implied to as broken at the start, something that if the hero doesn’t fix will eventually kill her/him – by fixing it we can essentially get to the theme of the story, i.e. what is it the character needs to change to live properly and by extension what is it that the reader needs to change/learn in order to live a better life.

When you understand your character, their problem and the theme then you can start to make the panels flow in a way that every panel serves one of these three elements.

That is the real beauty of comics that there are a plethora of ways to achieve this, and actually it’s great fun playing with all the different ways in which you can achieve it.  The way that you find, essentially will make the graphic novel ‘yours’.