The new Aardman Pirates! trailer is out.

Well I’ve been here in Bristol (well on the edge of Bristol – more South Gloucestershire actually) for most of the year.  We’re very close to finishing off the movie now.  It’s really been a special experience working on this movie.

Have a look at the trailer in full 1080p, quite a few of my shots are in here too.

Speaking of finishing of the movie we had our crew photo taken today, here it is. 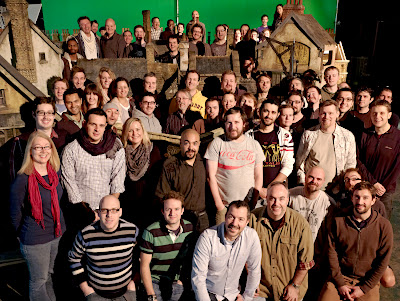 that’s me in the third/fourth row on the left leaning up against the roof of the house – three spots away from the director no less.

[Tweet “Here’s a photo of the #VFX crew I worked with on the Pirates #Movie pic.twitter.com/oGLv7v9pah #filmmaking #aardman”]