In this blog post I’m going to take you through five lessons I learnt at the last ever Guerilla Filmmaking masterclass, beware you’re going to learn more than just about filmmaking.

So it was an early start on Saturday as I headed somewhat wearily towards Baker Street for the final Guerilla filmmaking masterclass, it was touted as an event not to be missed and an end of an era – it certainly did live up to its billing.

I was lucky enough to be able to catch an interview with Chris Jones himself just moments after the class finished.  Let’s watch that video first.

So we spent a lot of time talking about how to get the money, all the different funding models from crowd funding to approaching wealthy individuals using EIS/SEIS – the crux of it came to convincing people to part with their money and (other than crowd funding) ultimately paying back the money.

So hence, a natural conclusion to the seemingly impossible task of asking people to part with their money came down to spending less money in the first place – i.e. make your movie for less money.

Great, so in practice how could you do this?

Well, in many of our cases we may have to scale back from out Gladiator set with 10,000 extras baying for blood from CG sabre tooth tigers and filming something much more practical and lower budget.  Here’s how

Now imagine if you can limit the characters and locations, the ultimate example of this is two characters in conflict in a single location – replace that car chases through the Swiss Alps with the two characters getting to the base of their problem face to face, essentially this will simplify your story and help you get to the crux of the conflict.

Yes all these higher budget pieces will come later, but for now focus on getting your movie made – spending less and having a lower budget will actually help you get that movie made and develop your storytelling skills.

This was one of those brainstorming sessions where Chris asked everyone to shout out ‘what makes a successful filmmaker’, we all shouted out answers, most were written down, but the point that Chris wanted to make is that it takes ‘courage’ to make a movie.  Yes, you can have plans, budgets, connections and everything else but without courage you are not going to move.

There were a number of examples that were used including these two rather interesting practicals – making volunteers walk bare foot across broken glass and sticking an arrow in the creek of their throat.  The point being that it is fear that holds most of us back from actually taking action.

If we can get over our fear we can start to make strides forwards – but first we need to understand what our fears are.

Many of us have a vision of our movie, how we want it to be, how it will look on the big screen, the opening night premier, the back slapping and the clinking of champagne glasses – however that’s quite far off and before we can get there, there are miles of sludge to call through.

When the distance between the first step and the end dream is so far, then the fear sets in – I don’t think it’s because of all the work involved, I think the fear is borne out of having to do it alone, but (without giving away the next point), having to do it alone is only at the start of the journey.

Picking up from the last lesson, you may start off alone in this journey, but that doesn’t and shouldn’t mean that you need to carry throughthe whole journey alone.  From my past experiences on this, it is definitely not about finding just any partner, in fact it’s better to alone for sometime while you find the right partner.

Believe me, I’ve partnered up with wrong collaborators which ended up costing me more in lost time and having to go back to square one

The amount of energy that I expended on the wrong partner not to mention the distraction and attention it tool away from the project means it’s really important to find the right partner to team up with.  So here are my own suggestions on finding the right partner to buddy up with while making your movie.

There are two types of people when it comes to making movies, those who will help you and those who won’t.  I learnt this the hard way, when I made my first short ‘Be Me’, I asked so many people to help me out on this, I got so many ‘I’d like to’, ‘can I get back to you’, ‘when do you need me?’

All of these BS answers, because they were too polite to say ‘no’, thinking somehow I’d be offended

The fact is if they did said ‘no’ – actually if you want to stay friends with someone then just say ‘no’ if you can’t commit to it – you’ll be doing your friend a bigger favour.

The internet is great and I’m all with the digital age (check out my digital blog here) get close to your peers.  What Chris’ point here is that being in the same or near enough geographic location is really important, it means you can get that face to face time with your team.

I have to caveat this, being in the same city or town as your partner doesn’t mean you are going to be a successful team, in fact you may end up skyp-ing (substitute in your own favourite video messaging service) each other more than you see each other.

The point here is not to rest on your laurels just because you are in the same town/city, you still have to work on the relationship.

You can, and must make times to meet and work on your project together.  If you’ve followed up to this point and found a complementary partner you are in a prime position to meet with them regularly and keep the momentum of the project going.

So what if you don’t live in a large town or city, what if you’re in the middle of nowhere and can’t find anyone local to collaborate with?

Well first of all search around, unless you are reading this in the middle of a desert then the chances are the place you live in has some kind of writing or filmmaking group, and if it doesn’t why don’t you start one up yourself?  Otherwise yes start making connections on Facebook, Twitter or Linked In

#justDoIt and when you do #justDoIt make sure you do it well.

This one is borne out of the concept of analysis-paralysis, think of it this way with this simple example

Okay so there’s a simple choice here to make, buy it or don’t buy it.  Now let’s look at situation B which has lots of choices to choose from

Here now you are going to spend your time between choosing between all the options (and if you eventually do choose, you’re most likely to end up with buyer’s regret for having chosen the wrong option and won’t enjoy the actual flavour you purchased).

In many ways this is what excessive planning of your project does to you.  You will end up spending so much time plotting out all the choices that

Now don’t get me wrong here, I’m not saying not to plan, indeed planning is good, but overplanning and not moving forward here is the enemy.

You pretty much know what the correct path is, it’s only a case of figuring out which variant of the path you want to tread is.

The gain you make from one variant to the other is incremental, e.g.

The incremental changes between these three options is 0.7%, the fact that either of them will get you 78% the way to your target is what is really important and not the incremental differences between them.  Obviously here I’m exaggerating to illustrate a point, the choices in the real world will be more clear cut than this.

Pick spend a reasonable amount of time planning it out and then go for it, make sure whichever plan you do opt for that you give it your all and execute as best as you can.

So there you have it, it was a great weekend of filmmaking insight.  I’m glad to have been part of history being the last every guerilla filmmaking masterclass.  Of course the real way to learn is to get a group of people together, grab your camera and make a movie.

To learn more about Chris Jones I’d recommend visiting his most excellent blog http://www.chrisjonesblog.com/where amongst other things you can learn more about his various filmmaking classes, books and podcasts. 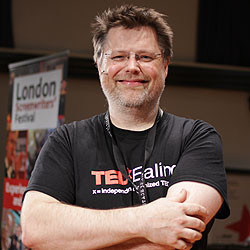 Tell me what your number 1 filmmaking piece of advice is, use the comments section below and share the knowledge.

Please use the social share buttons below to help spread the word and while you’re here have a look around, I’ve got loads more great articles and pieces all designed to help you in your film or animation making adventure – be sure to subscribe too!

See you guys next time – don’t be a stranger 🙂